A high-level outline of the Book of Romans, Part 1

This is going to be a high level view of the entire argument of the Book of Romans.

The first eleven chapters of the book of Romans are primarily doctrinal, and the rest, from chapter twelve to sixteen, are primarily practical, explaining the practical implications of the doctrine and exhorting the believer as to how to apply the doctrine.

You can’t get the doctrine of Sanctification right unless you first understand the big picture of Eternal Security, Retroactive Positional Truth, and the Baptism of the Holy Spirit before you even venture into the subject of Sanctification.

The main stream of Romans 5-8 is Eternal Security.

Romans 6-7 are dealing with objections raised by the critic debater that shows up quite often throughout the first eleven chapters of Romans.

Romans 6 deals with the charge that any grace-oriented pastor who preaches the gospel correctly will have made against him - that we are teaching antinomianism.

“Antinomian” does not appear in the New Testament, but it does come from two Greek words:
anti = against
nomos = law.
It means lawlessness.

Romans 7 is a very personal chapter where Paul explains how he tried to keep the law in his post-salvation life, and how disastrous that was, and what he discovered as a result of that futile striving.

Then Romans 8 gives the solution, namely a Christian walk by means of the power source of the indwelling Holy Spirit. 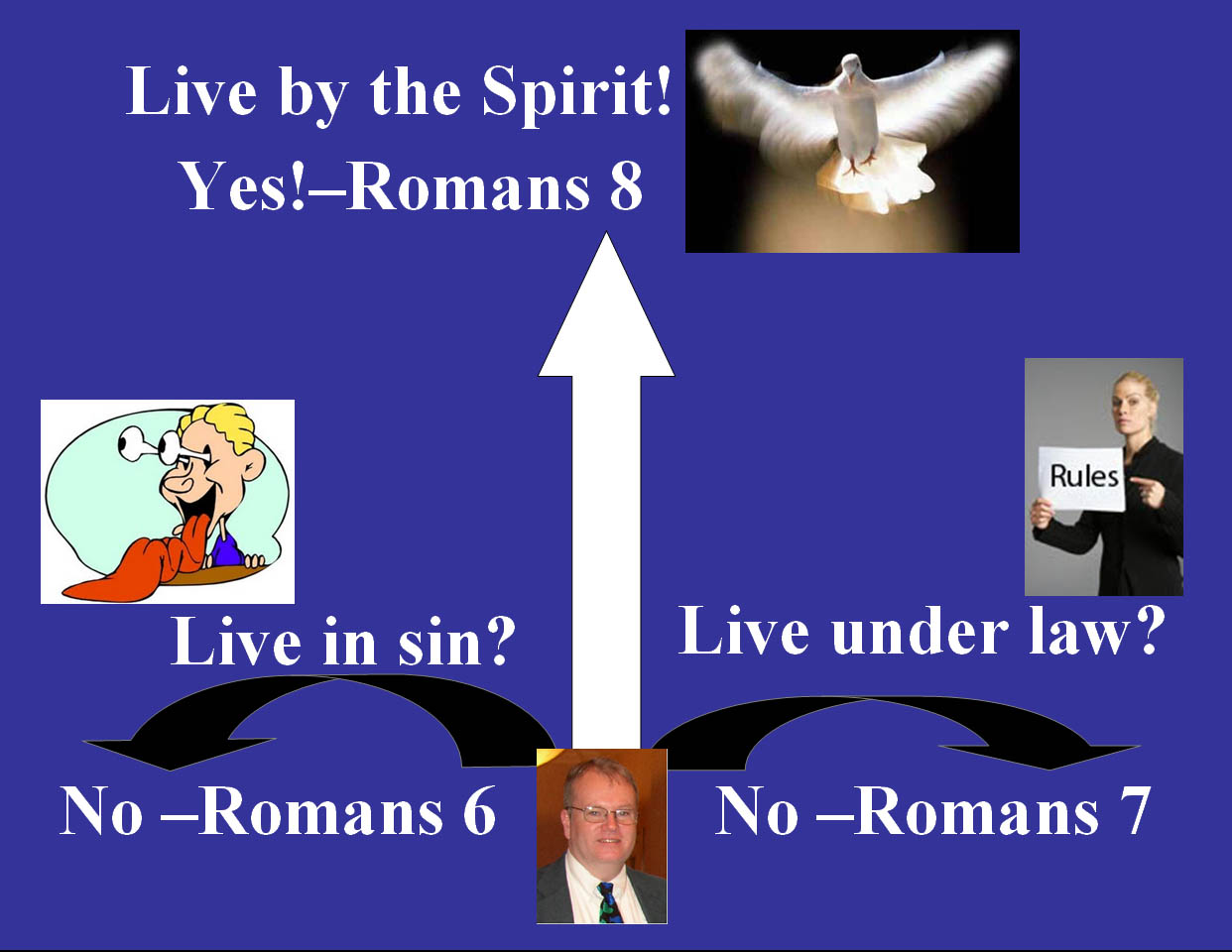 ROM 1:1-15.
This is what we call the salutation of the letter, followed by a general introduction to the theme of the letter.

ROM 1:18 through the end of chapter 1 is all about how the Gentiles need salvation in the worst way.

But the Jews need it just as badly, despite the fact that they had the Law, and that is what Paul takes up in Romans 2.

So Paul goes about stating that it was very advantageous to have been a Jew, in ROM 3:1-8.

There is not one righteous among the human race - the whole world is declared to be guilty and totally depraved.
Romans 3:9-20.

From ROM 1:18 - ROM 3:20 he deals with the plight of unregenerate, unrighteous, unbelieving mankind.

From ROM 3:21 forward he deals with the undeserved favor and destiny of whosoever places his destiny wholly in Christ by believing.

From ROM 3:21-31, Paul introduces his magnificent good news - we are justified by grace as a gift from God through faith in Christ.

Paul’s task was to explain that the Good News of salvation, justification by grace through faith, was actually taught in the Old Testament.

Romans 4 teaches that God has always dealt with man and blessed him in terms of faith and not works.

Abraham lived hundreds of years before God even revealed the Mosaic Law to His people!!!

Hebrews 11 is what we call the “Hall of Fame” passage in the Bible. It lists Old Testament saints who made God’s Hall of Fame.

Of those 16, how many were under the Law when they did what they were honored for in Heb 11?

Over half were not under the Law when they did what is mentioned in Hebrews 11 concerning them.

HEB 11:6 And without faith it is impossible to please Him, for he who comes to God must believe that He is and that He is a rewarder of those who seek Him.

He lays out the argument in chapter 4 using Abraham that his justification was by grace through faith not of works.

ROM 5:1-2 is itself a mini-outline of the first 8 chapters of the book of Romans.

Can you see how Sanctification is the one doctrine that is NOT brought up here in ROM 5:1-2?

And that something even MORE important is the eternal security of the believer. That is Paul’s primary theme in Romans 5-8, and every other doctrine he teaches is a branch off the main stream of eternal security.

If you want to know what a passage is really all about, sometimes it really helps to ask - what does this passage mean to God?