This problem was festering in the church of Corinth, and Paul addressed the problem head on with his teaching on the spiritual gifts.

This problem was disunity.

The word of God is a mirror, and, as we examine the ugly reality of the sin nature rearing its ugly head in Corinth, we will be looking at ourselves in our “flesh”.

As he looks at the present condition in Corinth, he keeps pointing back to the past, to Christ on the cross, and then forward to the future, to the Rapture and the eternal state.

Two of the best weapons in the arsenal of the Holy Spirit to oppose our flesh are the Cross and the Rapture.

The Cross humbles us, and the Rapture gets our priorities straight.

Paul wrote 1 Corinthians sometime in AD 53 or 54 when he was in Ephesus.

Most of 1 Corinthians is the apostle Paul correcting the church about different problems they are having. 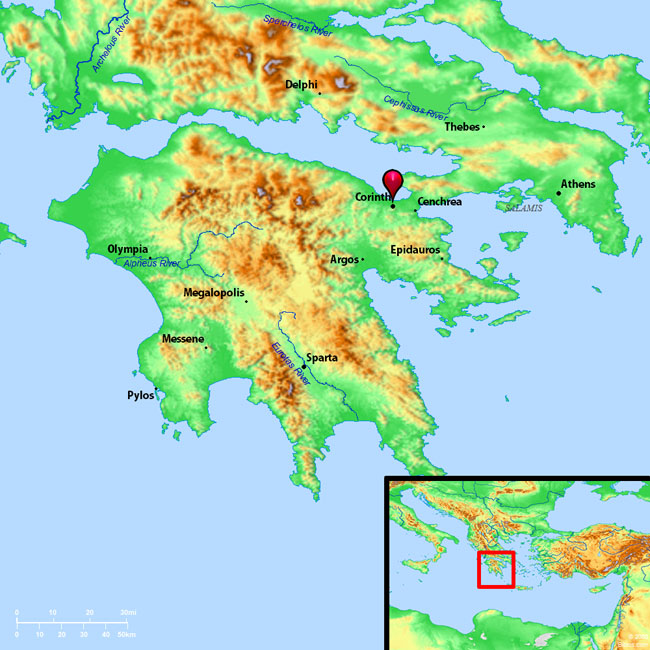 There were always lots of sailors, merchants, traders and so forth.

Given their complete lack of understanding of the cross, it is ironic that their wealth came from being at the heart of a geographic cross.

Religion in the ancient world also had its own peculiarities.

There was a strong connection between, eating, drinking, worship of idols, and sex.

The Greek term korinthiazomai (to behave like a Corinthian, literally) meant to practice fornication.

In 146 BC, Rome destroyed the city, killing the men and selling the women and children into slavery.

The Romans founded a lot of colonies. They saw it as a way to stop overcrowding in Rome and at the same time spread Roman civilization across the known world.

All these Romans immigrated to Corinth, and you end up with a city that has a Roman identity.

Because it is humiliating to be poor.

It is no fun to be a prisoner.

It’s shameful to be a slave.

He took the form of a slave.

He became the prisoner of the Romans, and died the shameful and scandalous death of the cross.

He became poor so that you might by His poverty become rich.

The city also hosted an important athletic event called the Isthmian games. This was something like the Olympics or the World Cup today.

Between the reigns of Augustus and Nero (the time of the life of Christ and the missionary journeys of Paul), there was a building boom in Corinth, so that it became “arguably the most dazzling and modern of Greek cities”.

Many inhabitants were so affluent that “wealth and ostentatious display became the hallmark of Corinth”.

Under the category of historical trends, we are in the last days, 2 Tim 3:1-5.

alazon = boaster, “one who makes more of himself than reality justifies”, or “promises more than he can perform”, often used in the ancient world to describe orators, philosophers, doctors, cooks, and officials.