The theme of the book of Romans is the Gospel, The Good News from God concerning His Son.

His calling was to be the Apostle to the Gentiles, defending the Gospel against Judaizers while teaching how Christ fulfilled the Old Testament prophecies and promises.

Paul the slave, the slave of Christ Jesus.

The Lord took Saul, the foremost of sinners and the persecutor of the Church, and produced Paul, the Lord’s specially chosen and finely crafted instrument!

Paulos is a Latin proper name. Latin was the language of the Romans.

The human author of the Book of Romans is the apostle Paul. The word “Paulos” means “little” in Latin.

God is so big and we are so small.

Paul is the only Bible author who put aside his Hebrew name, which was Saul, and used his Roman name, Paul, instead.
This magnifies his unique calling as the apostle to the Gentiles.

ACT 13:9 is where the Bible takes the name of Saul off the apostle’s jersey and sews on the new name, Paul.

The whole book of Acts is a transitional book. It tells the story of how the Church Age got up and running.

It was a common practice among the Jews to give their children a Gentile name in addition to the Hebrew one.

ACT 13:9 is the FIRST time that the Bible calls our apostle to the Gentiles by the name of Paul.

Saul is still very much the Jewish Pharisee at this point in his career, Act 7-8.

In Act 7-8, he is still hyper-Jewish, persecuting the church, and the Bible refers to him by the name of Saul.

You might think that his name would change at the moment of his salvation.

Now of course it makes sense that right here in ACT 9:4 the Lord calls him Saul because it was Saul the Hebrew of Hebrews who persecuted Christ by persecuting His body the church.

Saul? Still Saul? By getting up, he was obeying this Jesus. He was demonstrating that he now considered this Jesus His Lord and Savior.
Shouldn’t the Bible call him Paul?? After all, he is born again.

By ACT 9:11, our man is born again and saved and yet the Lord still calls him Saul!

ROM 1:1 Paul, a bond-servant of Christ Jesus, called as an apostle, set apart for the gospel of God,

The Lord hand-picked Paul for a tremendous task, because the Lord elected Paul to the Lord’s highest and best for his life. He was called to great privilege and great blessing.

ROM 1:6 among whom you also are the called of Jesus Christ;

The Lord has hand-picked you for a tremendous task. If you are a believer in Christ, the Lord willed His highest and best for you.

GAL 2:7 But on the contrary, seeing that I had been entrusted with the gospel to the uncircumcised, just as Peter had been to the circumcised

Paul has been set apart and elected in eternity past by God to preach the Gospel to the Gentiles.

The Jewish Christians who fled Jerusalem after the persecution that Stephen’s stoning triggered (Saul was prominent in this) ended up in new places including Cyprus and Antioch.

Saul and Barnabas arrive and minister to this Jewish and Gentile church in Antioch. They teach the word of God for a year here.

Finally, the day arrives when the Holy Spirit moves to set apart and call out Saul and Barnabas to leave Antioch and begin their specific and unique ministry. 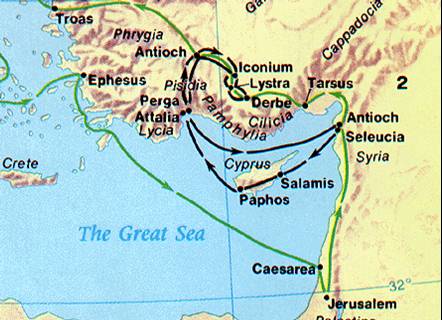 Until this episode he had been primarily trying to witness to the Jews. But from here forward he would live in his calling as the apostle to the Gentiles.