The subject of practical Christianity answers the following question:

After we have been justified forever by God, and given eternal life as well as other amazing permanent blessings, all by grace through faith…..

HOW ARE WE TO LIVE?

This is what the letter of James is all about.  It has nothing to say about eternal salvation by grace through faith.

James focuses on exhortation.  He gives clear and direct commands.  His statements are short and concise.

James uses certain words differently from how Paul uses the same word.  Righteousness, for example.  It takes on a different meaning in James than it does in Romans 1-5 or in Galatians.   Likewise, what James means by salvation and justification are different from what Paul means.

A few facts about the letter as we begin:

First, of all the letters in the New Testament, the letter of James is the most saturated with the teachings of Jesus, particularly from the Gospel of Matthew.

And 1 Corinthians 15 reveals that the resurrected Jesus appeared to his brother James before He appeared to the full apostolic company.

By the time we meet James again in the New Testament, he has become the leader of the Jerusalem church.

So James the brother of the Lord became a well-known figure in the early Jewish church.  The mere mention of his first name would have been sufficient for the saints to know who was writing to them.  His name carried great authority.

Those first two points were covered in part one of this series.

In this article, we continue to examine the background for the letter of James, including when and to whom the letter was written.

The date of writing

Third, when was this letter written?

We can say with a great deal of confidence that the letter of James was written sometime between 44 AD and 48 AD.

James emerged as a leader of the Jewish church in Jerusalem in 44 AD.  James and Paul attended the Jerusalem Council in 48 AD.

The details that support the time period of 44 AD - 48 AD  are worked out in the Appendix to this article.  It’s well worth the read.  You will learn some things about the book of Acts as well as about James.

Fourth, who was the original audience for this letter and what were their circumstances?

The letter reveals a lot about the people to whom it was written.

First of all, they were clearly Jews.

They were completely Jewish

The letter of James does not mention anything about Gentile Christians.  He wrote to  Jewish-only assemblies who met in synagogues.  They were anticipating the imminent return of the Lord to judge His people and usher in the earthly kingdom.

There are many references to distinctively Jewish institutions, figures, and beliefs.

The people who serve as illustrations in James include Abraham, Isaac, Rahab, Job, and Elijah.

The saints met in a synagogue, James 2:2.

The Greek word for ‘assembly’ in James 2:2 is  sunagoge.

No other epistle uses this word to mean an assembly of Christians.

It is found primarily in the Gospels where it is always translated ‘synagogue’ in the NASB.

The audience shares the author’s belief that the law is central to God’s dealings with His people.

James 2:8-13
8 If, however, you are fulfilling the royal law according to the Scripture, "YOU SHALL LOVE YOUR NEIGHBOR AS YOURSELF," you are doing well. 9 But if you show partiality, you are committing sin and are convicted by the law as transgressors. 10 For whoever keeps the whole law and yet stumbles in one point, he has become guilty of all. 11 For He who said, "DO NOT COMMIT ADULTERY," also said, "DO NOT COMMIT MURDER." Now if you do not commit adultery, but do commit murder, you have become a transgressor of the law. 12 So speak and so act as those who are to be judged by the law of liberty. 13 For judgment will be merciless to one who has shown no mercy; mercy triumphs over judgment.

James 4:11-12
11 Do not speak against one another, brethren. He who speaks against a brother or judges his brother, speaks against the law and judges the law; but if you judge the law, you are not a doer of the law but a judge of it.  12 There is only one Lawgiver and Judge, the One who is able to save and to destroy; but who are you who judge your neighbor?

And, as we have seen, the opening salutation shows that the recipients of the letter were Jewish.

When the twelve tribes are mentioned in the Bible, it is always a reference to the united nation of Israel.

Our Lord Jesus Christ spoke of the twelve tribes of Israel.

Matt 19:27-28
27 Then Peter said to Him, "Behold, we have left everything and followed You; what then will there be for us?" 28 And Jesus said to them, "Truly I say to you, that you who have followed Me, in the regeneration when the Son of Man will sit on His glorious throne, you also shall sit upon twelve thrones, judging the twelve tribes of Israel.

The apostle Paul was the apostle to the Gentiles.  Yet when he appeared before King Agrippa to defend his ministry against accusations from the Jews, he spoke of the twelve tribes of Israel in Acts 26:2-8.

Acts 26:2-8
2 "In regard to all the things of which I am accused by the Jews, I consider myself fortunate, King Agrippa, that I am about to make my defense before you today; 3 especially because you are an expert in all customs and questions among the Jews; therefore I beg you to listen to me patiently.

4 "So then, all Jews know my manner of life from my youth up, which from the beginning was spent among my own nation and at Jerusalem; 5 since they have known about me for a long time, if they are willing to testify, that I lived as a Pharisee according to the strictest sect of our religion. 6 "And now I am standing trial for the hope of the promise made by God to our fathers; 7 the promise to which our twelve tribes hope to attain, as they earnestly serve God night and day. And for this hope, O King, I am being accused by Jews. 8 "Why is it considered incredible among you people if God does raise the dead?

The New Testament testifies that James ministered to Jewish Christians.

Why were they dispersed abroad?

These Jewish  saints had been dispersed abroad.  They had been forced to leave their home city or region.

All twelve of the tribes of Israel were represented in their number.

But why were they dispersed abroad by the time that James wrote his letter?

Jewish Christians were dispersed abroad after the stoning of Stephen in Acts 7:59.  This occurred in 34 AD.

Acts 7:59-8:3
59 They went on stoning Stephen as he called on the Lord and said, "Lord Jesus, receive my spirit!" 60 Then falling on his knees, he cried out with a loud voice, "Lord, do not hold this sin against them!" Having said this, he fell asleep.

8:1 Saul was in hearty agreement with putting him to death.
And on that day a great persecution began against the church in Jerusalem, and they were all scattered throughout the regions of Judea and Samaria, except the apostles. 2 Some devout men buried Stephen, and made loud lamentation over him. 3 But Saul began ravaging the church, entering house after house, and dragging off men and women, he would put them in prison.

We learn more about where they relocated  in Acts 11.

Acts 11:19
19 So then those who were scattered because of the persecution that occurred in connection with Stephen made their way to Phoenicia and Cyprus and Antioch, speaking the word to no one except to Jews alone.

So Jewish Christians in the church of Jerusalem were persecuted. They fled Jerusalem and were dispersed to Judea and Samaria, then Phoenicia and Cyprus and Antioch. 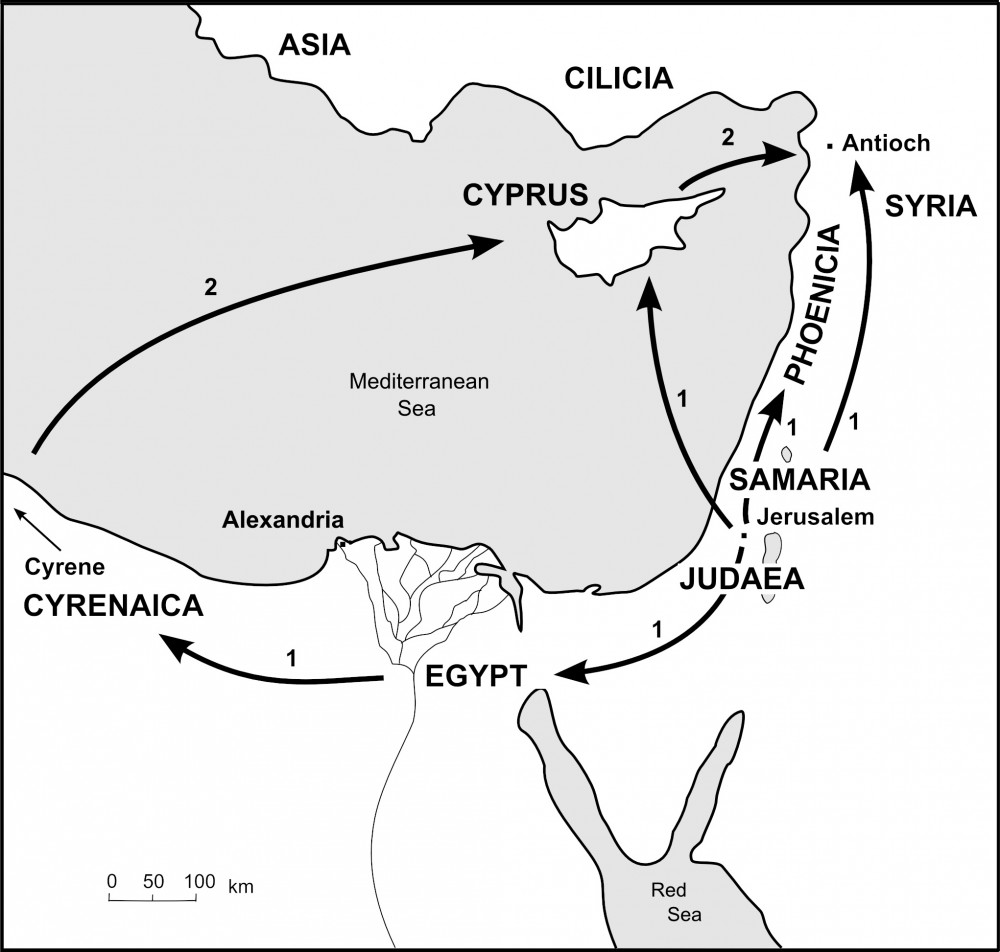 James wrote the letter of James to these Jewish Christians who were dispersed abroad because of the persecution that occurred in connection with the death of Stephen.

These Jewish Christians were in effect refugees.    This explains why the people who received the letter of James were, for the most part, poor and oppressed.

We see hundreds of thousands of refugees today who live under very similar conditions.

Wealthy landowners were taking advantage of them.

James 5:4-6
4 Behold, the pay of the laborers who mowed your fields, and which has been withheld by you, cries out against you; and the outcry of those who did the harvesting has reached the ears of the Lord of Sabaoth. 5 You have lived luxuriously on the earth and led a life of wanton pleasure; you have fattened your hearts in a day of slaughter. 6 You have condemned and put to death the righteous man; he does not resist you.

Rich people were hauling them into court and blaspheming their Lord.

James 2:6-7
But you have dishonored the poor man. Is it not the rich who oppress you and personally drag you into court? 7 Do they not blaspheme the fair name by which you have been called?

One big reason that James wrote to these Christians was to encourage them in the midst of their suffering and difficulties.

He reminded them that the Lord’s righteous judgment was coming (James 5:7-11).

James 5:7-11
7 Therefore be patient, brethren, until the coming of the Lord. The farmer waits for the precious produce of the soil, being patient about it, until it gets the early and late rains. 8 You too be patient; strengthen your hearts, for the coming of the Lord is near. 9 Do not complain, brethren, against one another, so that you yourselves may not be judged; behold, the Judge is standing right at the door. 10 As an example, brethren, of suffering and patience, take the prophets who spoke in the name of the Lord. 11 We count those blessed who endured. You have heard of the endurance of Job and have seen the outcome of the Lord's dealings, that the Lord is full of compassion and is merciful.

James 1:2-4
2 Consider it all joy, my brethren, when you encounter various trials, 3 knowing that the testing of your faith produces endurance. 4 And let endurance have its perfect result, so that you may be perfect and complete, lacking in nothing.

James 1:12
12 Blessed is a man who perseveres under trial; for once he has been approved, he will receive the crown of life which the Lord has promised to those who love Him.

In part 3, we will examine the role that faith plays in the letter of James.