This week, we will finish up our high-level look at subject of salvation.

We are going to revisit the five major aspects of the blood of Christ, what His death on the cross accomplished, only in more detail than last week.

Redemption (in relation to sin):

Liberation because of a payment made.  The payment was the Blood of Christ, His death on the cross as a substitute for each person in the world.  His death was a substitute ransom payment for all.

1PE 1:18 knowing that you were not redeemed with perishable things like silver or gold from your futile way of life inherited from your forefathers, 19 but with precious blood, as of a lamb unblemished and spotless, the blood of Christ.

1CO 6:20 For you have been bought with a price: therefore glorify God in your body.

2CO 5:15 and He died for all, so that they who live might no longer live for themselves, but for Him who died and rose again on their behalf.

GAL 5:13 For you were called to freedom, brethren; only do not turn your freedom into an opportunity for the flesh, but through love serve one another.

That aspect of Christ’s work on the cross that canceled the debt for the penalty of sin.  The penalty of sin is death - separation from God.  Expiation has to do with repairing a wrong, or the removal of something bad, as of wrath, sin, or guilt. 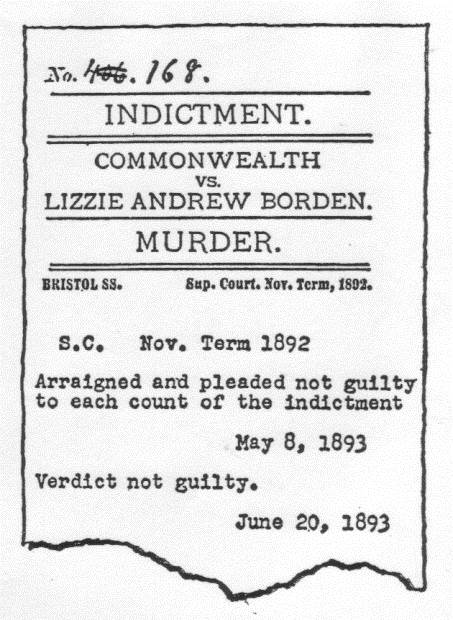 Expiation is also used at times to refer to the entire finished work of Christ on the cross.

As redemption was that part of God’s work that dealt with the problem of man’s sin, so expiation is that part that deals with the penalty of sin that God’s Law exacts on man the sinner.

Expiation means to undo a wrong done by paying or suffering the penalty for that wrong as demanded by law.

In essence, expiation means to remove the penalty officially imposed by law that indicts and proves the sinner guilty.

Because God is holy and man is sinful, God’s perfect justice must act against man to charge him as guilty and under the penalty of sin, with a debt to pay and a sentence to serve.  Thus, the Law of the Old Testament functions as a bill of indictment.

ROM 3:19 Now we know that whatever the Law says, it speaks to those who are under the Law, so that every mouth may be closed and all the world may become accountable to God;

ROM 3:20 because by the works of the Law no flesh will be justified in His sight; for through the Law comes the knowledge of sin.

To expiate means to make amends for an offense.  A criminal makes amends for his crime by serving a prescribed sentence.  After serving his time, the prisoner has paid his debt to society.

But fallen mankind can never repay the debt to God. No sinner can meet God’s standard of perfect righteousness. The penalty of sin has placed us hopelessly in debt.

The key passage that deals with the truth of expiation is COL 2:14.

Col 2: 14 having canceled out (wiped out, erased)  the certificate of debt   consisting of decrees against us (the Old Testament Law), which was hostile to us; and He has taken it out of the way (perfect tense  - removed, carried off), having nailed it to the cross (the means of removing the penalty was the blood of Christ - His death on the cross).

Jesus Christ as the only perfect man was qualified to pay this debt.

As sinless humanity, he went to the cross and was judged for our sins. When he said, “It is finished!”  (John 19:30a),   His redemptive work was concluded with His death.   Paid in full!

The problem of the penalty of sin was removed.  That is expiation.

Propitiation (in relation to God): 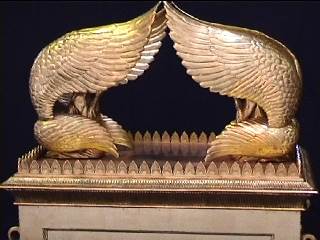 The word also denotes the turning away of wrath by an offering. In relationship to salvation, propitiation means satisfying the justice of God by the sacrificial work of Christ on the cross.

ROM 3:23 for all have sinned and fall short of the glory of God,

ROM 3:24 being justified as a gift by His grace through the redemption which is in Christ Jesus;

ROM 3:25 whom God displayed publicly as a propitiation in His blood through faith.

1JO 4:10 In this is love, not that we loved God, but that He loved us and sent His Son to be  the propitiation for our sins.

1JO 2:2 and He Himself is the propitiation for our sins; and not for ours only, but also for those of the whole world.

This propitiation was done for the whole world.  The justice of God the Father accepts  the work of Jesus Christ on the cross  as satisfactory payment for the sins of the entire world, past, present and future.

Propitiation is appropriated by faith in Christ.  It solves the demands of God’s righteousness and justice.

Reconciliation (in relation to the world):

The removal of the barrier between God and man, replacing enmity with peace.  While propitiation is Godward, reconciliation is man-ward. 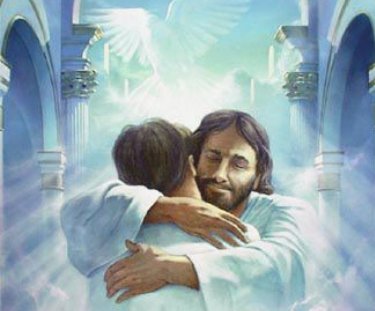 Reconciliation means a change of relationship from hostility to harmony and peace between two parties.  Here, we have to be reconciled to God, because the human race rebelled against Him when Adam sinned.

All believers are reconciled to God the moment they believe in Christ, but the work of reconciliation actually took place on the cross. We are restored to friendship and agreement with God by the work of Jesus Christ on the cross.

Because of sin, God and man were in a relationship of hostility and enmity.  We were enemies of God.    Prior to salvation, mankind is regarded as the enemy of God.

COL 1:21 And although you were formerly alienated and hostile in mind, engaged in evil deeds,

COL 1:22 yet He has now reconciled you in His fleshly body through death, in order to present you before Him holy and blameless and beyond reproach--

ROM 5:10 For if while we were enemies we were reconciled to God through the death of His Son, much more, having been reconciled, we shall be saved by His life.

2CO 5:18 Now all these things are from God, who reconciled us to Himself through Christ and gave us the ministry of reconciliation,

2CO 5:19  namely, that God was in Christ reconciling the world to Himself, not counting their trespasses against them, and He has committed to us the word of reconciliation.

We were at war with God, a war we were going to lose!  His wrath would have wiped us out.   We had an urgent need for a change in this relationship!

Peace is a synonym for reconciliation.

Jesus Christ came to provide peace with God through His work on the cross.

The death of Jesus Christ on the cross completely changed man’s former state of war into one of complete peace and harmony with a holy and just God.

COL 1:19 For it was the Father's good pleasure for all the fullness to dwell in Him,

Col 1: 20 and through Him to reconcile all things to Himself, having made peace through the blood of His cross; through Him, I say,  whether things on earth or things in heaven.

God provided reconciliation for the whole world.  Because of the death of Christ the position of the world was changed - people were now able to be saved.

This does not mean that all the world is universally saved, but that all may be saved.  Sin is no longer the issue; Christ is.  Where once stood the barrier, Christ now stands - the only Mediator between God and man.

1TI 2:3 This is good and acceptable in the sight of God our Savior,

1TI 2:4 who desires all men to be saved and to come to the knowledge of the truth.

1TI 2:5 For there is one God, and  one mediator also between God and men, the  man Christ Jesus,

1TI 2:6 who gave Himself as a ransom for all, the testimony given at the proper time.

When a person believes in the Person and Work of the Lord Jesus Christ, he receives the reconciliation that God provided in Christ’s death.

The world has been reconciled, but people need to be reconciled.

Once the barrier has been removed, now God is free in His justice to shower benefits upon human beings. 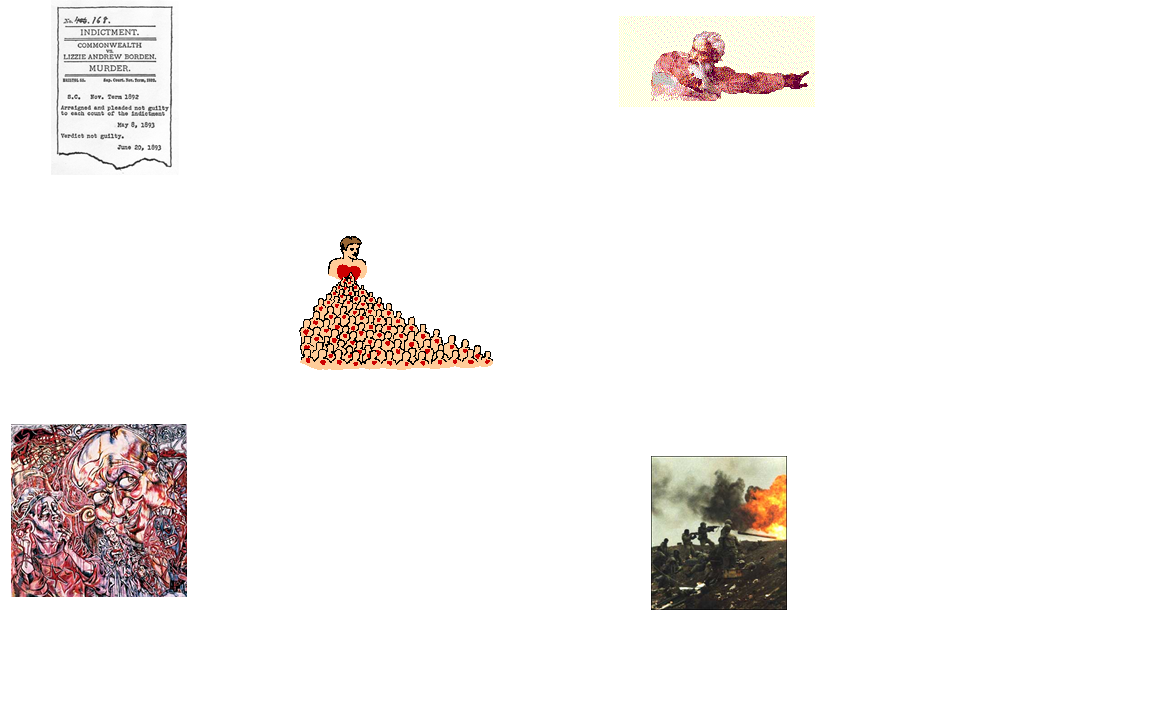 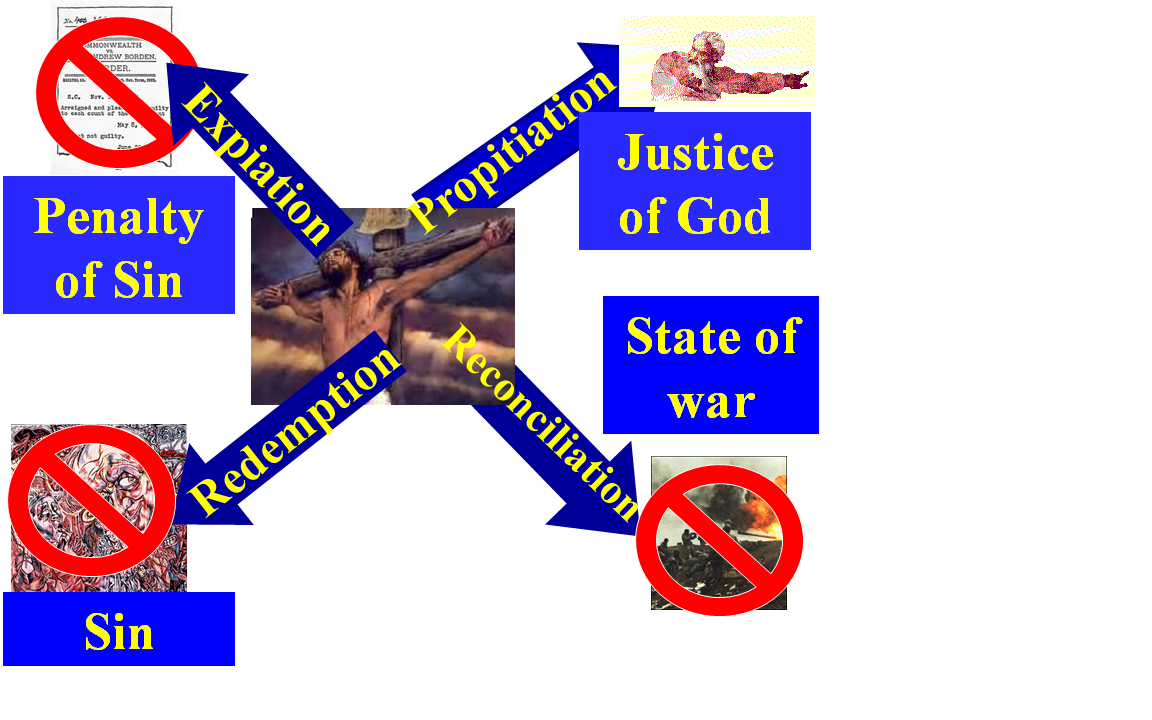 Justification means “vindication”.  It is the legal act of God whereby He declares the believer righteous because He has credited the believer with His perfect righteousness.  Justification occurs at the moment of faith in Christ.  To justify means to declare righteous.

The gist of this is not to make righteous, but to announce that righteousness. We are placed under the righteousness of God.  It is a courtroom concept. 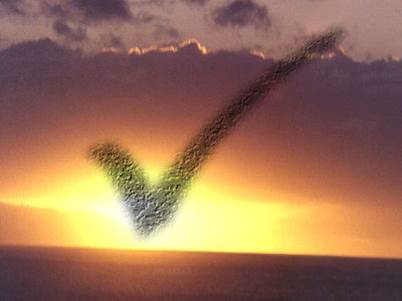 ROM 3:26 for the demonstration, I say, of His righteousness at the present time, so that He would be just and the justifier of the one who has faith in Jesus.

ROM 3:28 For we maintain that a man is justified by faith apart from works of the Law.

The work of justification was accomplished by Christ on the cross.

The courtroom comes to order.  The jurors file into the jury box.  The judge asks the foreman if they have reached a verdict.  “We have, your honor”.  “Bailiff, please accept the verdict and read it aloud in this court.”  On all counts, the unanimous verdict is “GUILTY”.

But then the defendant asks to approach the bench.

The guilty sinner claims the court case of the cross of Jesus Christ.  He tells the judge about the Substitute that died in his place and paid his penalty.

The judge accepts the payment.  The certificate of debt is stamped “canceled”.

The judge declares the sinner to be perfectly righteous forever.

So how can a sinner whose sins are an offense to God be declared perfectly righteous by God without God compromising His own righteousness and integrity?

This gets at the heart of salvation.  For as Job asked, JOB 9:2 "In truth I know that this is so; But how can a man be in the right before God?

ROM 3:21 But now apart from the Law the righteousness of God has been manifested, being witnessed by the Law and the Prophets,

ROM 3:22 even the  righteousness of God through faith in Jesus Christ for all those who believe; for there is no distinction;

ROM 3:23 for all have sinned and fall short of the glory of God,

ROM 3:24 being justified as a gift by His grace through the redemption which is in Christ Jesus;

God sent His Son Jesus Christ as the sin offering. God condemned our sin in the flesh of Jesus Christ.

This freed God to be able to declare righteous in His eyes anyone who would trust in the work of His Son rather than any personal works or merit.

We are justified by faith, not by works.  Justification is a grace gift from God, made possible only because Jesus Christ paid our ransom for us.

2CO 5:21 He made Him [the Lord Jesus Christ] who knew no sin to be sin [the sin offering, the sin-bearer] on our behalf [as our substitute], so that we might [by  believing] become the righteousness of God [justification]  in Him [baptism of the Spirit].

Recap, and what's next

Let’s recap, and this time we’ll see our key memory word for each of the five aspects of salvation.

Next time, we will begin examining the amazing things that God does for us at the moment of salvation, beginning with something called regeneration.  Stay tuned!